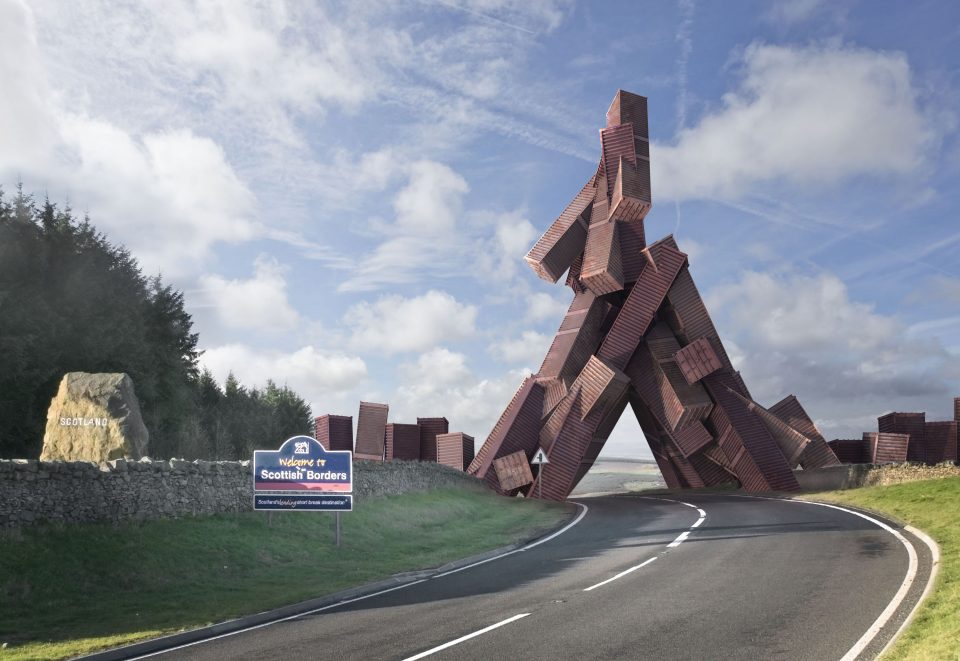 We are very excited to be able to reveal news on our latest collaboration with artist David Mach and Anise Gallery.
Designs have been developed and planning permission granted for one of the biggest artworks ever to be realised in the UK.

Planning permission was granted early last year and construction has begun on a curtain, an Iron Curtain, running from the Solway Firth on the West coast of Scotland to Berwick, to Marshall Meadows Bay on its East coast.

Over 100 miles long and an unparalleled feat of engineering on these Islands, David Mach RA is building what he has now nicknamed ‘The Irn Curtain‘ from 400,000 shipping containers. Imagine 20 of the world’s largest
container ships fully stocked and you’ll have some idea of the scale of this project. The ‘wonder of the world‘ is rising up out of our West coast like the basalt rock formations at the Giant’s Causeway.

Proposed as a kind of contemporary Hadrian’s Wall, once completed, the Irn Curtain will stretch out and snake its way across the land, through National Parks, through towns and villages, the containers clustering together like crystals, broadening out to form grand halls and rising up in the air to form great landmark towers until they drop back into the sea on our Eastern side. Whilst many believe Hadrian’s Wall to be the actual border between Scotland and England, the ‘Curtain‘ will sit slightly further north where the real border is, and it will act exactly like that – it will be a real border.

I’ve worked with David several times during the last two decades, and we’re currently collaborating on a ‘Titanic’ project in Belfast. The idea of redefining a boundary between Scotland and England with shipping containers is timely, as the combination of the SNP and Alba will now push hard for a Scot-exit. What better iconographic image than building a 100-mile long wall of iron to define that nostalgic moment when England was merely an outpost of the Roman Empire? Professor Ian Ritchie RA

Working with David has been a very stimulating experience. Rather than our usual approach to commissioning buildings, David asks what happens when the architecture begins as an exploration of an idea. David’s Irn Curtain response is typical of his approach – take a proposition, step sideways then push, prod and provoke. Combining seemingly unrelated news stories, Irn Curtain condenses the global and the local, the political and the social, the historic and the here and now; it proposes a vision of what could be. It is beautiful, fascinating and disturbing in equal measure. Chris Milan –  Parabola

The curtain will form a border between two countries, but we haven’t had to wait for Scotland to declare Independence to create it. It will certainly work as a formidable border, but it has another deeper function. David Mach RA and the investors behind the Curtain see it more as a line, ‘stitching‘ two countries together – not a border splitting them apart – with that stitch offering up 100 miles of opportunity.

Construction is due to be complete December 2021, it has been an absolute pleasure and privilege to work alongside David on these early stages. Follow #IrnCurtain to keep up to date with progress on The Irn Curtain.