This year’s RIBAJ 2017 Eye Line competition saw an undeniably wide breadth of talent and we were enormously proud to be part of it again, partnering with RIBAJ for the second year in a row. Judge Hugh Pearman noted himself that there was a truly diverse multitude of styles to be observed; from dark, rainy dystopias, to colourful, pop imagery, graphic novel and comics styles, photo realism, abstraction, multi-point perspectives and fantasy kingdom of TV series and films, through to traditional, soft pencil sketches. One thing that was beyond doubt was the extremely high level of talent on display.

Momentum had been building on social media as the entries were published on a daily basis over the month of July on RIBAJ’s Instagram and Twitter, culminating in the grand finale on Monday when the first place winner was announced. Matthew Kernan, an Irish architect student from Queen’s University Belfast took our breaths away with his contemplative and haunting pieces ‘Locus Amoenus’ and ‘Fragmenting Nostalgia.’ The beauty and skill of these pieces were beyond dispute, even reflected by their outstanding popularity on social media. Touching in the simplicity of their off-centre compositions, yet deeply profound in the smallest details, it was obvious that these were to be the winning pieces. Founder Joe Robson said of them “‘The more you look at them, the more they engage – I’m reminded of Holbein’s Ambassadors.” Second and third places went respectively to the highly detailed, grid-like and cartographic drawings from Frances Williams, and to the brilliantly fantastical works from Luca Gamberini.

RIBAJ brings to light the idea that drawing is pivotal to the architectural design process, allowing the designer more leeway to creative experimentation at design development stage. At AVR, we strongly feel that it is competitions like these that serve as platforms to showcase architect’s drawing skills and to encourage them to draw on these skills, thus reviving and popularizing the art form.

Founder and Eye Line judge Joe Robson discusses this in greater detail in this month’s issue of the Riba Journal in his poignant piece ‘The Mind’s Eye.’ Having studied architecture, and having founded a prominent architectural visualisation company and architectural art gallery, it is profoundly important to him to be part of a competition that trail blazes the way for the artistic skills of young architects, while keeping traditional methods at the fore. 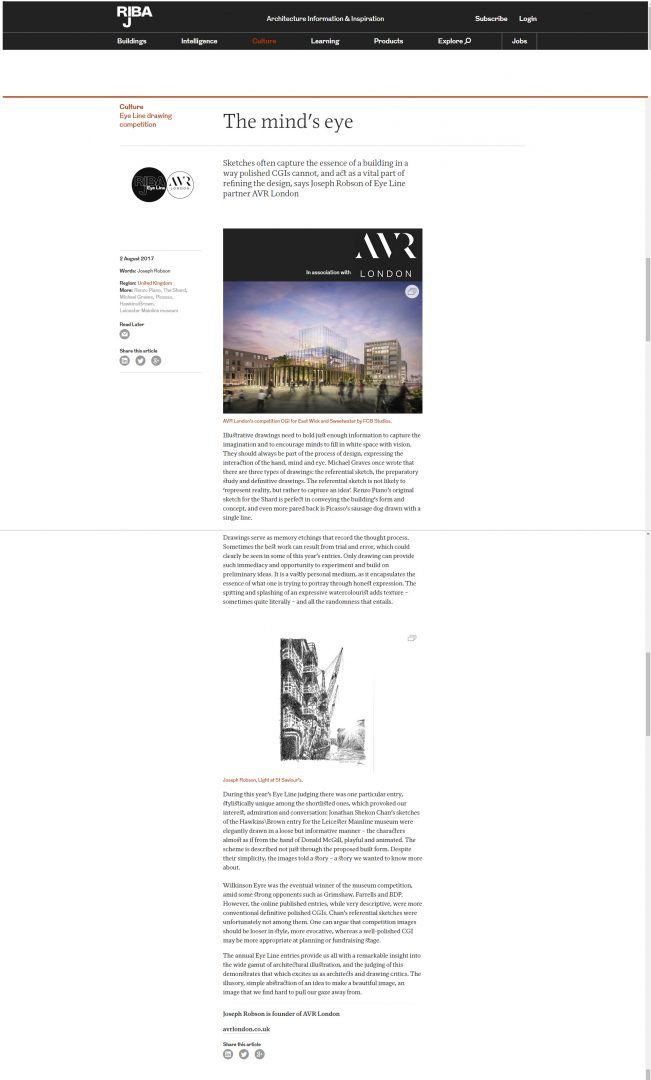 To read the article on the RIBAJ website, please visit:  https://www.ribaj.com/culture/the-mind-s-eye-avr-london